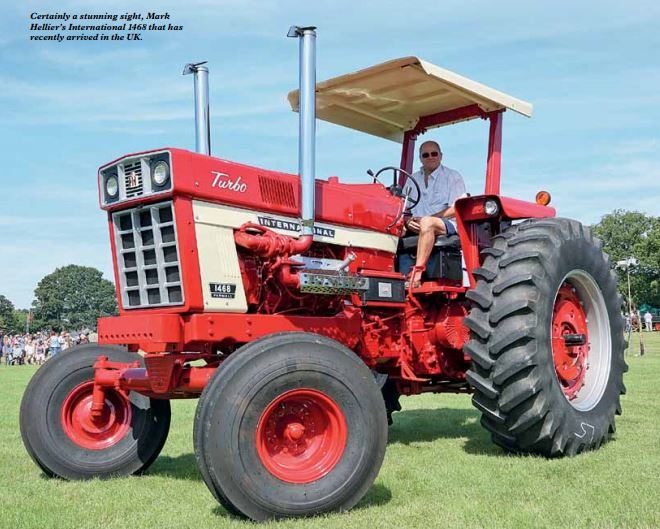 Mark Hellier’s International Farmall 1468 only arrived in this country on 19 August, but a couple of days later made its debut at Biddenden Tractorfest on Saturday 22 August. Peter Love looks at this tractor, possibly unique in the UK and Ireland, and the background to the model.

Tractor dealer Mark Hellier has been trading for more than 30 years, based at 1,000 Acre Farm, near Biddenden, in the Weald of Kent. He not only buys and sells agricultural machinery, but leases a good number of machines as well and has a very good relationship with North American dealers to whom he exports stock.

Mark was offered this stunning V8-powered International 1468 and thought he must have it. When he saw it in the UK for the very first time, he was more than pleased with his purchase. It was even better than the pictures, on the basis of which he had bought it. The tractor is really in concours condition.

In 1971-74, International Harvester Co made some 2,905 examples of this model. IH was following the trends of other manufacturers at the time, such as Oliver and Massey Ferguson, by installing V8 engines. Perhaps wisely, John Deere, decided not to go down that route when looking to create ‘The New Generation’. Using in-line engines, John Deere went on to take over from IH as the number one seller in the home country market. 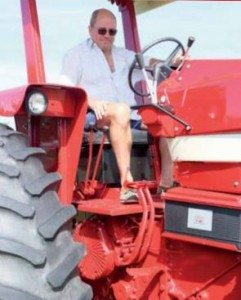 The International Farmall 1468 was the first eight-cylinder model by this famous row-crop maker, although in 1973 IH management made the conscious decision to end the Farmall range, when Brooks McCormick, CEO of the company, introduced his rationalisation scheme in his drive for more profitability. Even so, a few of the 1468 models were finished with Farmall badges.

The basis for this ‘showpiece’ model, as they were referred to by the salesmen of the time, was the 66 series that had arrived in 1971 to replace the 56 family. The new series had a heavy-duty adjustable axle, wider bonnet line, a different grille with headlights as standard built in at the top, with a new line of diesel power from Melrose Park and its 300/400 engines.

Also part of the new package was the excellent two-door Isomount sound compliant deluxe cab that had a built-in safety frame. There is an excellent dash panel layout, with clearly visible dials. The cab set new standards for IHC with vision, safety and ROPS. The open-station canopy, seen here, was sold in some numbers on the range, for working in hotter climates. 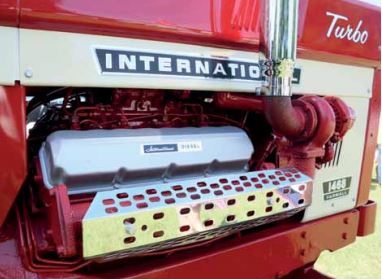 For the 1468, the engineers fitted the DV-550 9-litre V8 engine, from the truck line of the company, rather than use the turbocharged straight six of the 1466 model that produced 146hp (in the later examples). Why fit an engine that had less horsepower than its predecessor remains a mystery, as sales and profits were picking up for IH at the time. It’s suggested the company was looking for a glamour model to appeal to the less conservative younger farmer; it would be good for publicity and hopefully sales would exceed 10,000.

Unfortunately, IH was still riddled with bad debt and faced problems that were to become inherent within the whole of the western world in the later ’70s. Farming went from boom to bust. By then the 1468, and the 1568 that superseded it, were already confined to history, some were still in IH dealer’s sales rooms unsold and a number were in the workshops for repairs.

The DV-550 engine was something of an afterthought for a tractor as it wasn’t really a modular part of the skid unit. It had to be adapted; the pressed-frame side sections were replaced with cast iron that gave more strength and made the V8 engine more harmonized with the rest of the skid unit. The problem was that the ‘V’ layout of the engine put the cylinder heads and manifolds out further than the frame of the tractor. 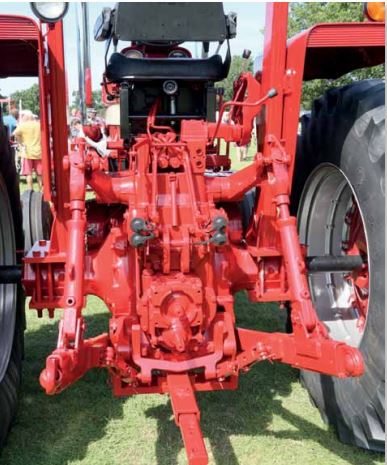 In close crops, or forestry, this could create fires from the heat of those components. IH routed the exhaust manifold outlets to the front of the engine and the upright silencers carried stylised heat shields over them. The mountings for the manifold heat shields also allowed a certain amount of movement, to protect them from stress fractures.

Mark Hellier’s example has double chrome straight pipes and also has twin turbochargers, retrofitted by either the former owner or dealer perhaps. Even in working times, it was not uncommon to find examples so converted. Some suffered the consequences, with holed blocks and bent con-rods, but the characteristics of the V8 truck engine did not suit the agricultural environment in which tractors work. The engine was short on slogging power, particularly noticeable when working with a large implement.

The tractors have an American Bosch injection system. The pump is set to run on four cylinders when idling (nos. 1, 4, 6 and 7) on the standard, naturally-aspirated engine. The inlet and exhaust valves simply stay shut, operated by a venting and cam system, although many were modified to run continuously. Who says fuel economy is something new? 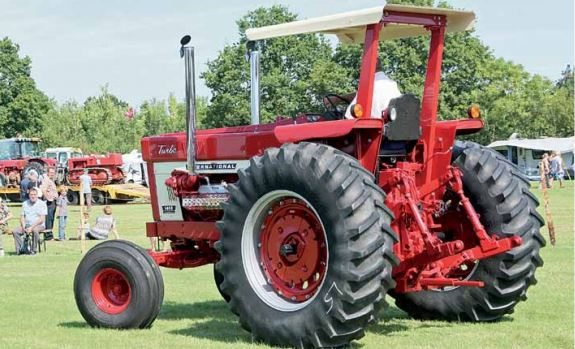 The standard transmission on the 1468 was eight-speed with four reverse, which could be rather fragile, with the Torque Amplifier option, (doubled ratios) with which Mark’s example is fitted. The upgraded 1974 IH 1568 was closer to the straightsix 1566 model, with a revised transmission and slightly more powerful engine.

International’s V8 tractor power flirtation was over and it must have cost the company money in the long run. In preservation times these machines are highly sought after. They don’t come up very often, but are certainly glamorous machines to own and show and it’s a privilege to have Mark’s example here for us all to enjoy.

This site uses Akismet to reduce spam. Learn how your comment data is processed.

To get the latest updates from Mark Hellier Tractors Limited